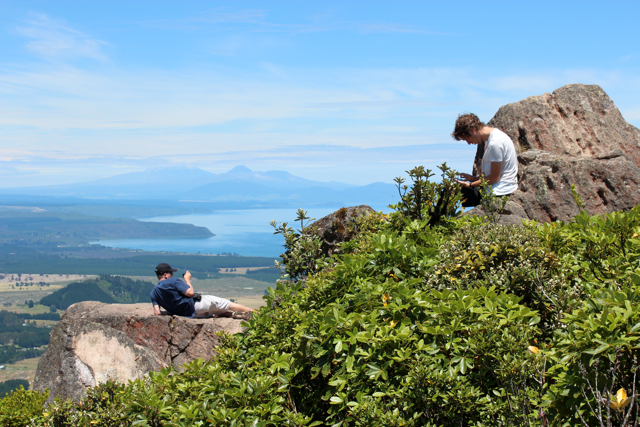 The day after a successful concert in Taupo in early January 2014, I was taken for a walk with friends to the summit of Mount Tauhara, 3,569 feet (1,088 m) above sea level.  The expansive views were impressive and the atmosphere tranquil as we looked out towards Mount Ruapehu and Nguarahoe way in the distance.  It was a great photo opportunity so it was good that I had my camera with me.

Back in Auckland I noticed a photo competition being run by Fairfax Media who publish Auckland community newspapers such as the Central Leader.  They were asking for photographers to enter favourite holiday photos for the chance to win a food and drinks voucher and to have the photograph published Auckland wide.  I decided to enter my favourite of the Mount Tauhara shots, one showing two tourists seemingly ignoring the view while distracted (as I was at the time!) by technology.

Knowing how many talented photographers there are these days I didn't think there was much chance of winning, so it came as a complete surprise when the publisher contacted me to say they'd quite like to use the photo and award me the prize.

Climbing Mt Tauhara was a great way to wind down following a concert and the photo competition win was the icing on the cake!